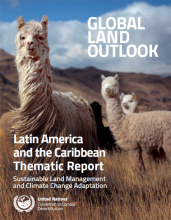 The extensive arable land and great biodiversity present in Latin America and the Caribbean (LAC) have the potential to ensure sustenance and a good quality of life for its more than 600 million inhabitants. LAC has experienced important changes in land use. When the Europeans arrived in the 15th century, the forest cover of LAC accounted for approximately 75 per cent of the territory. At present, forests cover less than 50 per cent of the territory, 90 per cent of which is due to the expansion of agriculture and livestock, especially during the 20th century and the beginning of the 21st century.

In LAC, the primary factors that have contributed to land degradation are population growth, deforestation and the management of grassland ecosystems (savannas, steppes, pampas, fields, etc.), as well as natural phenomena exacerbated or not by human action. As land degradation progresses, soil, hydrology, biomass, biodiversity and climate are all adversely affected. Regarding the factors that affect degradation, an analysis was carried out in eight LAC countries, considering six factors, as well as their concurrence and convergence in a certain geographical space, and their evolution in a certain period of time.