Losing productive land is driving people to make risky life choices. In rural areas where people depend on scarce productive land resources, land degradation is a driver of forced migration. Africa is particularly susceptible since more than 90% of our economy depends on a climate-sensitive natural resource base like rain-fed, subsistence agriculture. Unless we change the way we manage our land, in the next 30 years we may leave a billion or more vulnerable poor people with little choice but to fight or flee.

Against this backdrop, the Senegalese Presidency of NEPAD and the UNFCCC COP22 Moroccan Presidency will co-organize an African Ministerial meeting on "Sustainability, Stability and Security (3S)" that will be held on 14 November at 11am in the Moroccan Pavilion at UNFCCC COP22. The meeting will gather ministers and high-level officials from the 54 African countries along with a few key development partners engaged in processes dealing with migration and security issues. The topics covered during the meeting will include migration, security, resource conflict and climate change resilience.

The Great Green Wall: Hope for the Sahara and the Sahel 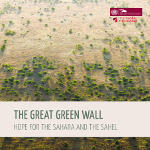 Africa is growing a real wonder of the world. The Great Green Wall for the Sahara and the Sahel could play a decisive role in the future of the African continent. The Sahel region is one of the most arid and most vulnerable places on earth. Food, water and economic opportunity are often scarce. The…
Download
Publication type
UNCCD Publications
Publication date
26/04/2016