The WDCD is observed every year on 17 June. This year the Day's theme is "Conserving land and water = Securing our common future".

Desertification, land degradation and drought (DLDD) threaten human security by depriving people of their means of life – by taking away food, access to water, the means for economic activities, and even their homes. In worst-case scenarios, they undermine national and regional security, force people to leave their homes and can trigger low- or high-level intensity conflicts.

On this WDCD, we would like to remind everyone that threat to soil security unleashed by desertification, land degradation and the effects of drought constitute a peril to securing our common future.

The WDCD has been observed since 1995 (General Assembly Resolution A/RES/49/1995) to promote public awareness relating to international cooperation to combat desertification and the effects of drought, and the implementation of the UNCCD. Everyone can celebrate WDCD through organizing activities such as seminars, media events and campaigns. Every single activity involving community participation and cooperation is encouraged! 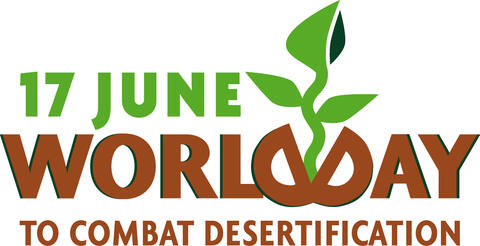 The UNCCD Secretariat would be delighted to hear from you about how your country plans to mark WDCD. The information received will be posted on our website. We wish you every success in your activities to celebrate 17 June 2009.

To request further information, such as WDCD messages from United Nations officials or press releases in additional languages, as well as past campaign, press or awareness raising materials, please contact secretariat@unccd.int

Events Around the World

WDCD Events around the world 2009

Joint Statement from the Global Environment Facility and the UNCCD

Message from the Convention on Biodiversity Executive Secretary